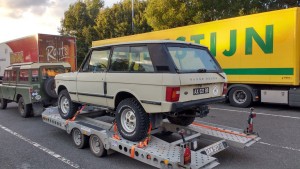 2-door Range Rover Classics (Classic being the name given to the original generation, made from 1970 to 1995, when the 2nd gen P38A arrived in the early 90’s) are, in my opinion, one of the finest looking vehicles Land Rover ever made.

With the exception of the odd special edition, the 2-door Range Rover was only made for the UK market up to 1982. This means that most of them have gone to the great rusty graveyard in the sky, and they’re fairly scarce now. This is a problem – like Series 1 Land Rovers, in the last few years the prices being asked for early Range Rovers have gone a bit mental.

I’ve wanted one for a while, but I can’t justify spending what the UK market ones are selling for. Thankfully, Land Rover kept making the 2-door models right through the production run for some foreign markets. Consequently, they are a lot more common in certain European countries. These models aren’t as desirable over here as early UK market ones, which means they can be had relatively cheaply. If you can deal with the hassle of importing one, and either driving it left hand drive or converting to right hand drive, it’s a cheap(ish) way of getting hold of a 2-door Classic. Prices are rising though, and it’s evident from watching eBay that there are a good few traders profiting from importing these models. 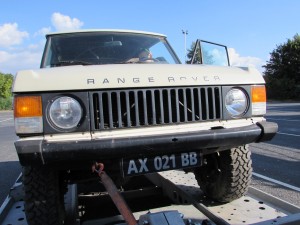 I pulled the trigger on this one a couple of months back. It’s an ’85 model year BA VIN in Sahara Dust.

The BA series (BA being the last two letters in the VIN number before the serial number) was only made for the one model year.

The ’85 model year had the 3.5 Rover V8 on carbs, and the 5-speed LT77 gearbox. The LT77 was only introduced the previous model year, earlier examples had the 4-speed LT95 box. The LT77 isn’t reputed to be as tough as the LT95, but I’ve used a later LT77s before which didn’t give me any serious problems. The higher ratio top end of the LT77 should be good for keeping the revs down when cruising, too.

The construction method of a Range Rover differs quite substantially from a Land Rover. Rather than having a load of mostly aluminium parts individually bolted to a steel ladder frame chassis, the Range Rover had an aluminium outer skin bolted and riveted to a steel inner body, which in turn was bolted to a ladder chassis. On early models this inner shell was made up of steel panels bolted and riveted together. Later, these panels were welded together – apparently to save money. This was carried forward to Discovery production with even more cost cutting measures – like the steel boot floor, rather than the Range Rover’s aluminium floor.

Having a separate body shell is a good thing in many ways, as a Range Rover body has far fewer draughts and rattles than a Land Rover. The body is also isolated from the chassis with rubber block mounts, which should go some way to dampen vibrations transmitted from the chassis to the body. You certainly get less vibes in a Range Rover, though it’s hard to tell how much each aspect of its construction contributes to this.

The downside of having this steel body frame is that there’s a lot more to rust. On a Land Rover you only really need to worry about the chassis and bulkhead rusting. On a Range Rover, pretty much the whole thing can rust. Further, all the steelwork in the body is hidden away underneath the aluminium outer skin, so rust in a Range Rover shell can go unnoticed if the owner isn’t careful. 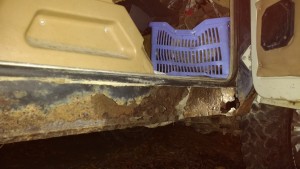 By the time rot in the body becomes obvious, usually when the sills rot right through underneath, it’s often uneconomical to repair – that is, if you’re paying someone else to do the work. Access is nowhere near as easy to a Range Rover body for welding as it is on a Land Rover chassis. A lot more dismantling is required to even see the extent of the rust problem, let alone replace the affected panels or do the repair work. The panels are also more complex in a Range Rover. This is a good thing from a performance perspective – complex pressed panels are stiffer than flat panels, which means less vibration and, if designed well, less weight. It makes weld repairs more difficult though. Replacement panels are available for many of the commonly-rotten ones, which gives the option of complete panel replacement. The panels aren’t cheap, so this option is likely to appeal more to the restorer than to someone looking for a cheap and cheerful repair to get through an MOT. There probably aren’t many 2-door Range Rovers in the latter category now, but I’ve seen plenty ‘that’ll do’ repairs on later Range Rovers and Discoveries.

I’ve done some fairly bodge-tastic repairs myself, if i’m honest. In my defence, it was a Discovery and I was a poor student. Box section steel was a lot cheaper than replacement sills, and I didn’t have the facilities to fold my own out of sheet.

This Range Rover came from France, which you would think would mean it isn’t very rusty. That’s not the case though, the rust on this one is fairly impressive. I would say that the sills are the worst I’ve seen, but that would be lying. For that to be the case, I would have to be able to see them, which I can’t as they have all but disappeared. Judging by the sills and rear of the chassis, I think this one must have been used for launching boats or something earlier in its life. I’ve yet to investigate fully, but I fully expect the rust to have spread to the A-pillars, inner wings, rear body crossmember, footwells – basically any of the lower-down steel panels. 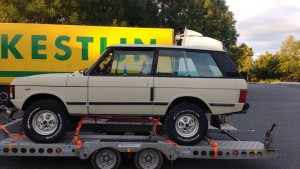 This doesn’t really bother me – welding is probably my favourite Land Rover repair activity. It’s not everyone’s cup of tea though, and it’s an expensive job to pay someone else to do. A Land/Range Rover in need of welding can be had a bit cheaper than one which doesn’t (apparently they do exist…) so it’s not necessarily a terrible thing buying a rotter if you enjoy doing the repair work.

What attracted me to this particular Range Rover was that the outer body is fairly tidy. I enjoy welding much, much more than I enjoy panelwork and spraying, so for me this is a good thing. The panels and paintwork on this one are obviously showing their age, but in a ‘lived in’ fashion rather than needing serious repair. It also appears fairly unmolested – with the exception of a suspension lift and larger tyres, it looks pretty original. I think a bog-standard 2-door looks great, so original is where I want it to be.

I’ve yet to get stuck into stripping this one down – we’re looking to move house (I need a bigger shed…) and I don’t want to have to transport the Range Rover in a million bits. I’m a trifle impatient, hopefully we’ll get a new pad soon so that work can begin. 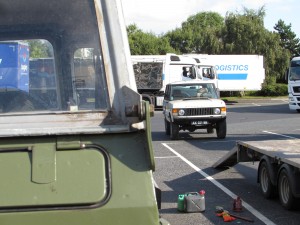