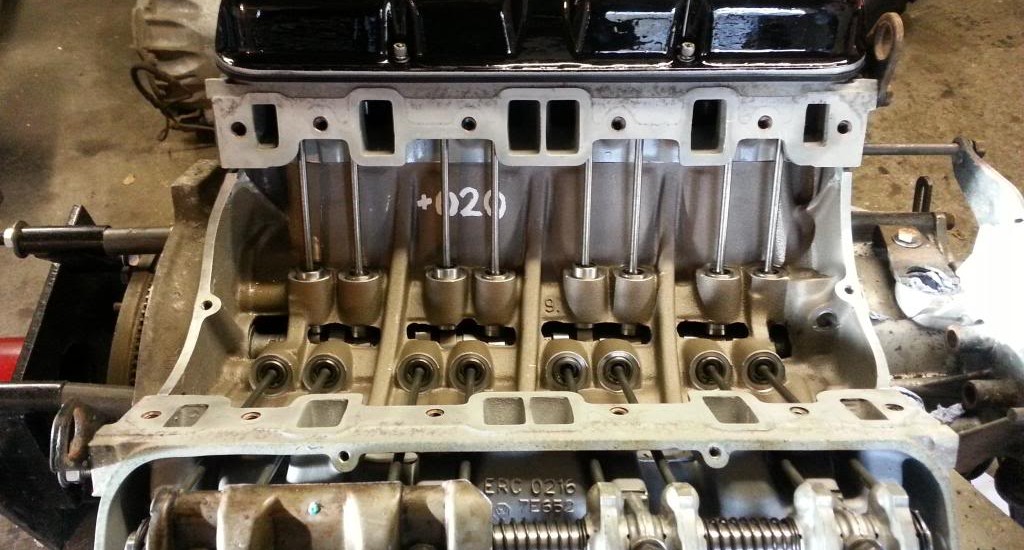 This is not a Land Rover for purists. At some point in the dim and distant past, it was an 88″ series 1. Then it was turned into a hybrid – by someone with not very much skill, as I discovered once I started stripping it down… It seems that the series 1 donated (most of) the bodywork, a pre-1986 Range Rover donated the axles, engine (3.5 V8) and chassis, and a late 80’s/early 90’s Range Rover donated the transmission (LT77s & Borg Warner) and fuel injection system (Lucas 14CUX hotwire).

This doesn’t happen much these days, as even basket-case series 1’s go for serious money. Back in the 80’s and 90’s they were dead cheap though, so combining a Range Rover with a rotten body and a series 1 with a rotten chassis was relatively commonplace.

This one was actually on the road and had a recent MOT when I took ownership. I suspect the MOT was obtained without the inspector actually seeing it though, as there were some fairly horrible bodges lurking underneath the (badly) hand-painted bodywork.

I don’t especially want to include a picture of what it looked like when I bought it, as it was hideous. It had presumably been built when the lights-in-wings thing was still fresh and fashionable, so someone put series 3 wings on it and even, shame of shames, the grill and bonnet from a 90/110. Bask in its ugliness: 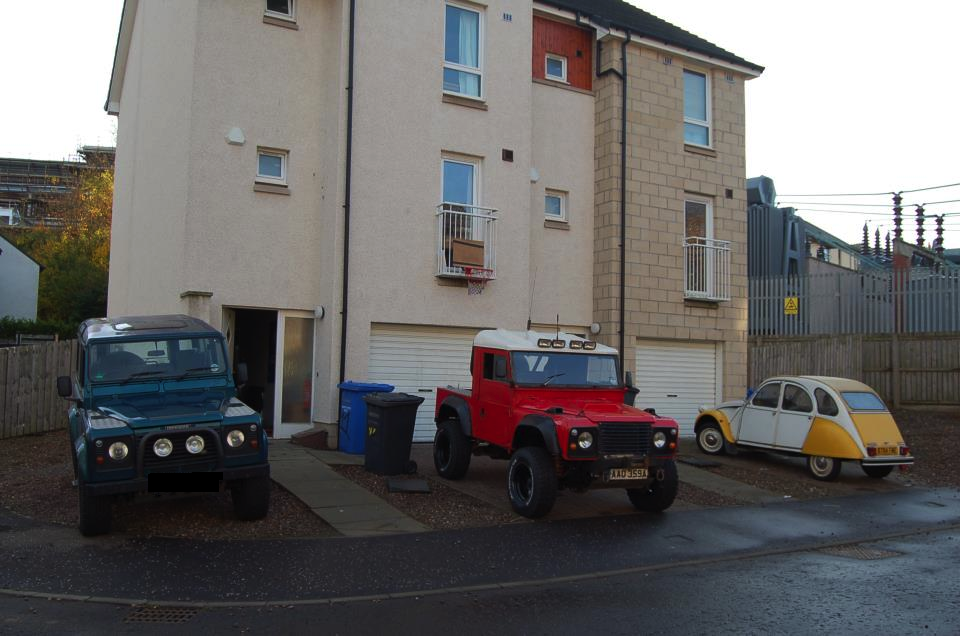 I’ve got a thing for an underdog though, and in the world of Land Rovers, there’s no underdog like a hybrid. The very mention of one gets the rivet-counting forumites frothing at the mouth, which I find somewhat amusing.

You wouldn’t rip up a series 1 and an early rangey to build one of these now, obviously – but chances are if you see one of these it was built when noone wanted series 1’s or early rangies. If the hybrid hadn’t robbed the bits, they’d probably both have been scrapped – and that would be a waste.
A hybrid can also be a whole lot of fun. Even this thing when I bought it, with it’s clapped-out v8 ticking away, was a massive laugh to drive. It was like a shorter, lighter 90 – in fact it felt lighter and more nimble than any other Land Rover I’ve driven.

I’ve been working on it for 4 or 5 years now, off and on. It’s not a high priority, so progress only really happens when I haven’t got anything more pressing to do. Here’s a summary of what I’ve done to it thus far. 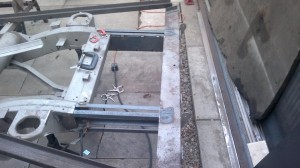 I stripped it down to the chassis and had it shotblasted. I then rebuilt the chassis rails from the rear axle back as the crossmember had been welded on squint. Structurally the chassis was actually in very good condition – no rust to speak of.

The bulkhead was toast (and welded directly to the chassis, yuk), so I made a new one. It’s basically a box section frame in 50x50x2 mm steel box, clad in aluminium panels. I’d do it differently now, but it was a decent enough job at the time (probably 4 years ago now). 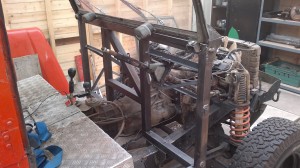 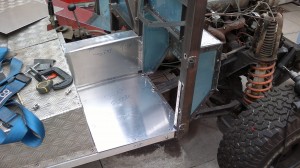 Chassis and bulkhead frame were then galvanised, as I’m a bit of a galvanising fan. 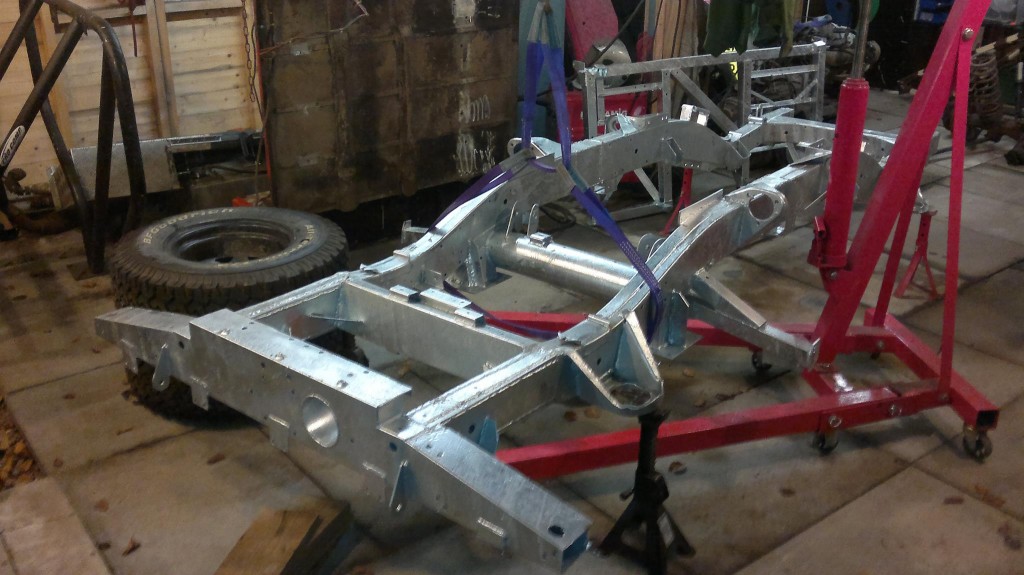 The axles, upper and lower suspension links and radius arms were shotblasted and resprayed. The axles were rebuilt with new seals, swivels and bearings. 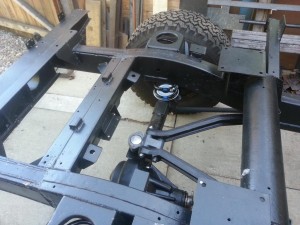 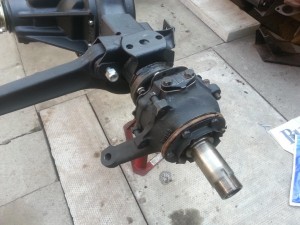 Brake calipers were blasted, stripped and rebuilt with stainless pistons and new seals. 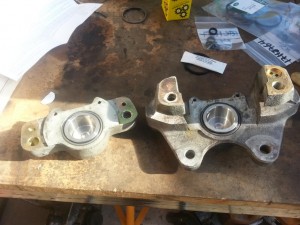 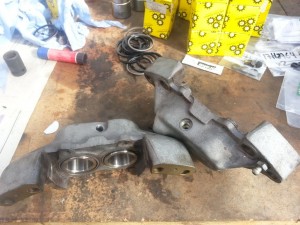 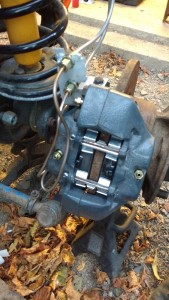 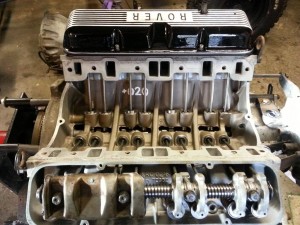 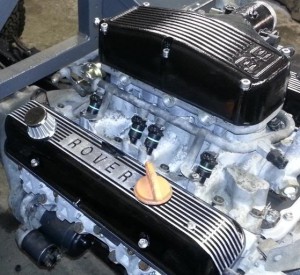 That’s about where things have been for ages now – I’ve been spraying the bodywork in bits and pieces and slowly assembling things. There’s not *that* much to do now really – plumbing and electrics, make a dash, hopefully source a proper series 1 front end… 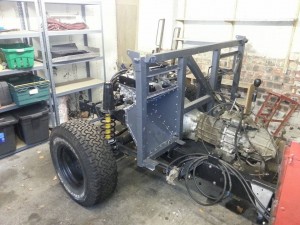 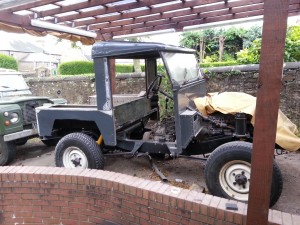