Went to start the 110 the other day and it would barely turn over. Ho hum.

There are a number of reasons why this could be – dead battery, dead starter, poor wiring ‘twixt the two – so some diagnostic work was required.

With a spare battery hooked up in parallel using jump leads, the engine fired up no bother. Chances are, then, that the starter motor itself, and the battery wiring, are ok.

The battery must be discharged – this wasn’t the result I was expecting, as the battery is new and was fully charged before fitting ~3 weeks ago. 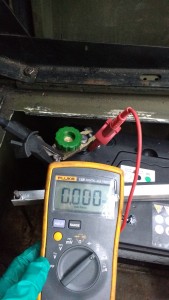 Why would a nearly-new battery be so discharged? Either something has drained it while it’s been sat idle for the last week or so, or it hasn’t been charging properly. Both of these possibilities can be investigated using the trusty multimeter.

With the engine off, I isolated the battery from earth. One of the first things I do when getting a Land Rover is to fit an earth isolator, which makes isolating the battery much quicker then removing a terminal. This one’s a ‘Dis-Car-Nect’ – there are probably other makes/models. With the earth isolated, the circuit can be completed using the multimeter, in ammeter mode.

This showed that there was nothing draining the battery – for now at least. It doesn’t rule out an intermittent fault, but it gave me reasonable confidence there was no unwanted drain. 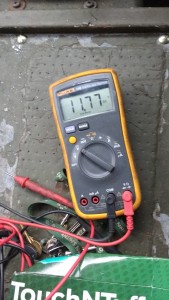 Next up, with the battery connected to earth again, the multimeter in voltmeter mode was connected across the two battery terminals. A charged battery under no load should show around 12.5 to 13 V potential across the terminals. With the engine running and the battery charging, it should show 14 to 14.5 V.
With the engine running, (and a fairly discharged battery) this one showed < 12 V. Bingo, the alternator wasn’t charging the battery.
Under the bonnet, the fan belt was intact and the alternator was spinning fine. 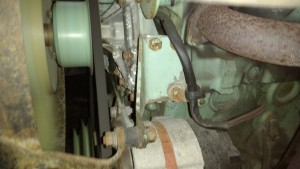 The voltmeter reading was the same at the alternator as it had been across the battery, ruling out faulty wiring between alternator and battery. 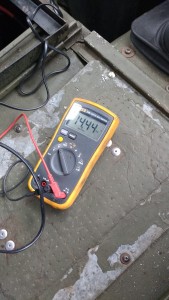 I replaced the alternator with a spare one, and now there’s a healthy 14.4 V across the battery at tickover.

It’s now working fine, but there’s something bugging me about the failure of the old alternator. The charge light in the dash was going off with the engine running, as it should. With the alternator not kicking out at least 12 V, there should have been sufficient potential between the battery and the alternator to light up the charge light. It’s all well and good getting things going by replacing parts, but I’d like to know exactly what went wrong with the old one before I consign it to the scrap bin. Some further testing is in order I think.