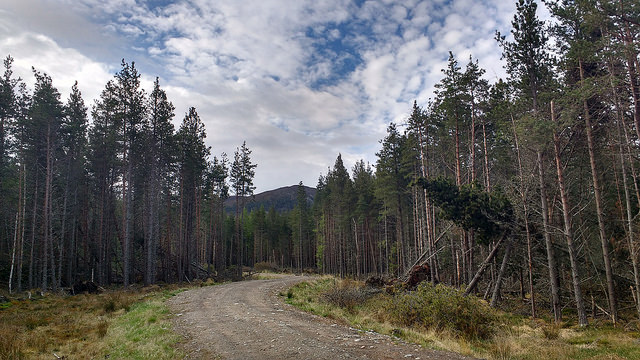 Following the inch of snow we had a couple of weeks back, it would appear that summer has now arrived. We’re in that sweet spot where the weather isn’t pants any more, but the midges haven’t all hatched yet. I’m a walking, talking midge magnet so for me, this time of year is the bomb for landy camping.

I had a hill race (the running kind, not the rally kind) over on the west coast at the weekend. I didn’t fancy doing all the driving in a day, so pretty much a prime opportunity for some in-landy camping action.

The 109 is off the road for some door frame repairs, so the roof tent was a no go. As an alternative, I knocked up a quick platform bed for the back of the 110 using 22 mm floor boarding and some roofing battens. Not a million miles away from what I used in the 109 before getting the roof tent, but mounted at bulkhead height rather than wheelarch height. With a self-inflating mattress on top, this makes for a pretty decent bed. 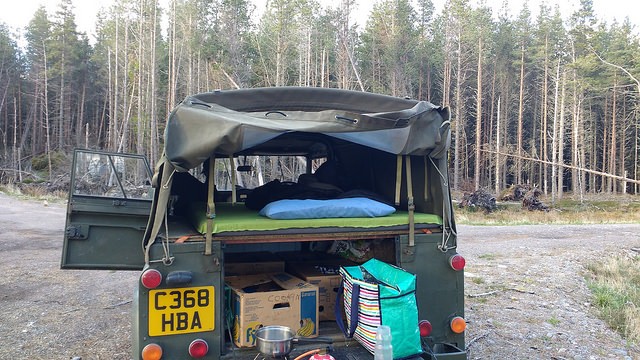 The whole lot was well strapped down in case of a crash – those sections of board would make a right mess of a person in a sudden deceleration.

I stopped over on the Friday night near Aviemore to break the journey up a bit.

Although people are generally ok with car-based camping in Scotland, the less visible you are the better. The 110 made an admirable stealth camper – the 109 isn’t exactly conspicuous, but the MOD colour scheme on the 110 blends in rather nicely with greenery. 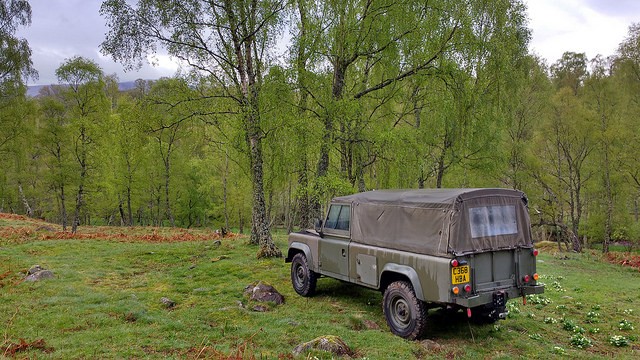 The next day, somewhat predictably, it started raining pretty much as soon as I left Inverness to head west. Didn’t dampen my enthusiasm for a coffee break, mind. 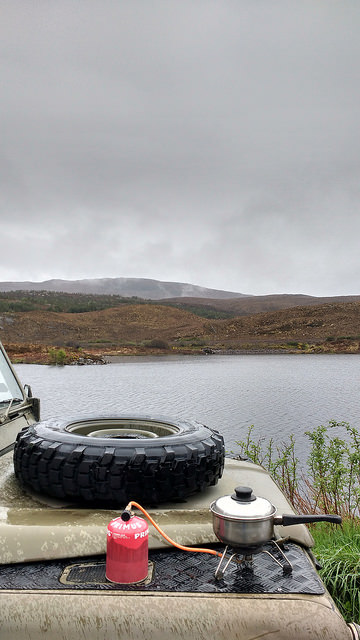 It was still raining when I got to the west coast – and had been for several days previously apparently. This was a shame, as when the clouds briefly broke the view south to Loch Maree from Sgurr Dubh was stunning. The rain was fairly biblical – the runoff from the hill was above my ankles in places, and that’s not including the actual burns. Cracking race though, brutal profile and like all the best hill races there were bottles of local beer given out at the finish. Nom. 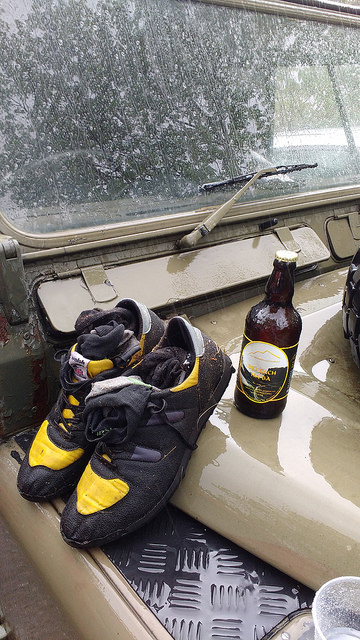 I had planned on staying over and smashing out a few other munros in the area on Sunday. The rain still hadn’t stopped by the end of the race though, so I decided to head back east. Running in poor weather is one thing, but camping in it can get old very quickly without some kind of awning.

I stopped over near Aviemore again, though at a different spot. Tourist season hasn’t properly kicked off yet, so you don’t have to go far to find deserted roads and a decent place to park up for the night. 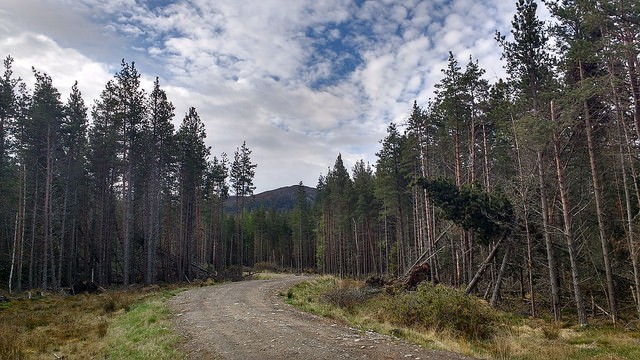 I stayed near the start point for the hills I was planning to nail on Sunday so that I wouldn’t need to drive in the morning. 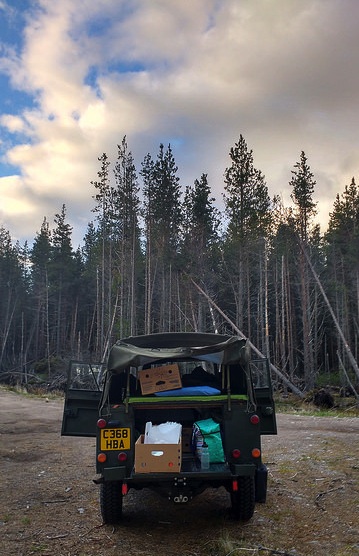 The weather was pretty sweet the next day, making up a bit for the drenching I got the previous day. Cloud cover was fairly low at first, but after a couple of hours it lifted to show off some epic views from the top of Sgor Gaoith.
I’ve said it before and I’ll no doubt say it again – when Scotland is good, it’s very good: 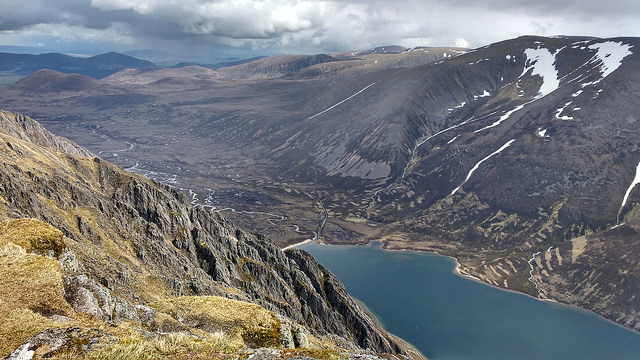 That was it, really – a fairly modest trip, so no major dramas or mechanicals to speak of. There was the rental car that took off on the wrong side of the road on the A823 though. It flew round a few blind bends at speed before the driver worked out why that guy in the old Land Rover was flashing his lights and tooting a lot! It’s easily done, but could have been properly nasty if they had met someone coming the other way.
Another annoying electrical gremlin showed up too – the wipers were intermittently cutting out, usually when the drivers side one was right in my line of sight. The temperature and fuel gauges cut out at the same time – these are on the same circuit as the wipers, so it’s probably either a dodgy connection in the fuse box or a corroded earth.

There was a good chunk of A-road bashing to be done. This got me musing on gear ratios. The 2.5 NA diesel and 1.667 ratio transfer box (vs the 1.410 in later models) meant that progress was sedate, at best. Cruising speed is around 45-50 mph, which can get a bit tedious on longer stretches. To my shame, I had to pull over on the A9 quite a few times to let trucks past(!)
I think an overdrive would be a sensible upgrade to drop the revs a bit. I can’t really fault the Rocky Mountain unit I fitted to the 109, and they make one to suit the LT77/LT230 so I’ll probably save some pennies for one of those.
I don’t really want to fit a higher ratio transfer box, as the poor 2.5 N/A Diesel won’t have the guts to pull the higher ratios when fully laden or towing. My old ex-MOD 90 had a 1.211 ratio Discovery box fitted and it was horrible to drive when laden, or indeed up hills.
For hours of gear ratio fun, the Ashcroft calculator is worth a look to see how different combinations compare. I’ll be having a good play around to see what setup to go for, but I think the 1.667 tbox plus overdrive is my current choice.

Dropping a tdi in is of course an option, as it would pull the higher ratios with ease. I actually quite like the 2.5 N/A though – it’s a nice free-revving thing, and much less harsh to drive (and listen to!) than a tdi.

I’m happy with the setup for now. I wouldn’t want to have to get anywhere quickly in the 110, but for me that’s not what it’s about. Cruising at 50 with the window open feels just about right when you’re in no hurry. If I leave in plenty time and have that mindset, I enjoy the journey for what it is much more than if I’m in a rush to get somewhere.