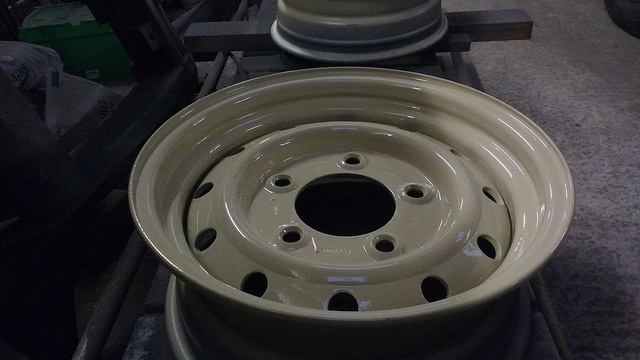 One of the first things needing (loosest possible use of the word) sorted for the 127 was a set of wheels – it was fitted with 9″ wide modulars. Mingin’. 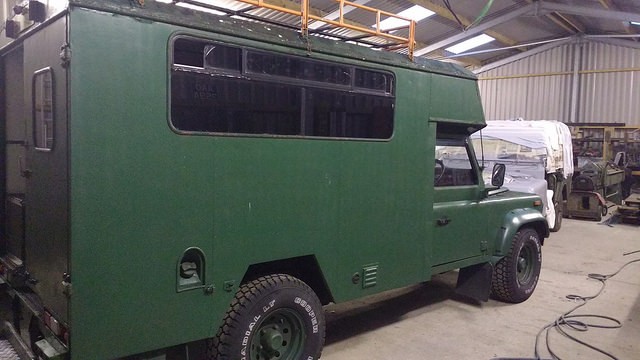 The only sensibly-priced option seems to be ‘Wolf’ wheels, as fitted to Wolf 90/110’s (hence the unofficial name) and Pulse 130’s.  They also seem to show up on some later general service ex-MOD Land Rovers.

New, these can be acquired for about £50 each – that’s genuine ones, copies are available a bit cheaper. Sensibly, this is probably the cheapest route to 6.5″ rims.

They can also be had second hand. I picked up a set of five slightly shabby ones from one of the forums. 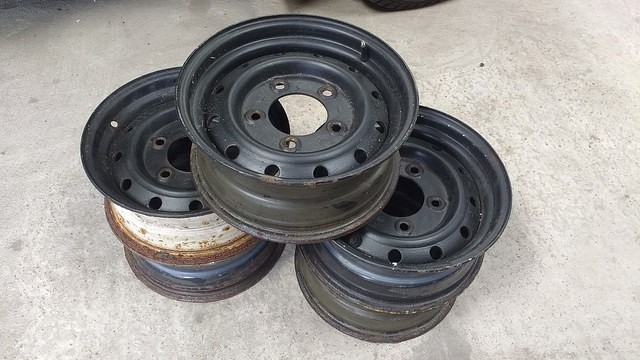 The plan was to blast and respray them. I’m not going to claim that refurbing wheels is the most efficient way to go, not by a long shot – it takes a lot of time. Buying new would work out much, much cheaper if you took the time taken into account. Where’s the fun in just buying new stuff though?

Wheels can be a bit tricky when it comes to de-rusting – I’ve yet to see a lasting job done by wire brush. Corroded steel isn’t smooth, and the wire brush can’t get down into the pits. A wire brush also doesn’t key the surface very well, and cant get into the nooks and crannies of a complex shaped part like a wheel. For these reasons, I’m of the opinion that media blasting is the best prep for wheel rims.

Now, in the past I’ve taken large-ish items to a professional blasters prior to painting or galvanising. I’ve got a lot of parts needing done just now though, and taking them to the pros is both inconvenient and expensive. I figured it was time to sort myself out with a blasting setup. Behold, sir blastalot: 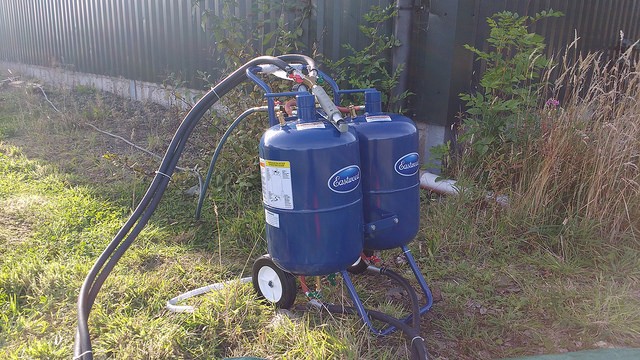 It’s an Eastwood dual blaster (grit in one tank, soda in the other). The idea is, the grit tank gets used for taking off rust and on hard materials like steel. The soda tank is used for taking off paint and on softer materials. To be honest, it felt like a bit of a rip off. Not because it doesn’t work, but because it’s essentially two steel tanks, some hose, and a couple of valves – and Frost want the best part of £500 for it. There doesn’t appear to be anything else on the market that does the same job though, so prepare for some serious wallet deflation if one of these tickles your fancy.

The difference between this type of blaster and some of the cheaper types is that the media is pressure-fed. The tanks are pressurised, and the media outlets are at the bottom of the tanks. There’s a mixing valve at the base of each tank to change the ratio of air (which comes round a bypass hose) to media. This works much, much better than the suction-type blasters (I’ve got a cabinet which works that way, it’s rubbish).

As well as the blaster, you obviously need a compressor. Chances are if you’re looking at one of these you already have a compressor, but it needs to kick out a fair bit of air. I use a Clarke 150 litre job that was the biggest I could find to run on single phase, and I wouldn’t want anything smaller for the blaster – it eats a lot of air. 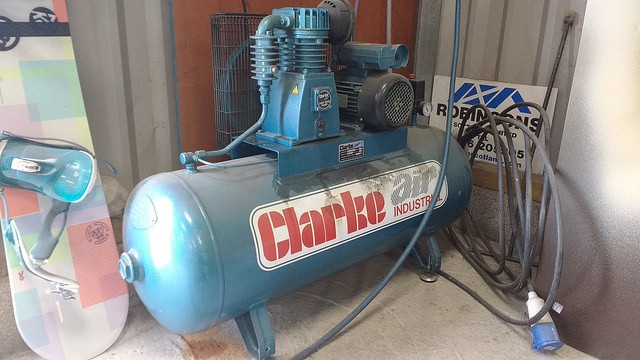 There’s also the grit itself – it’s not cheap stuff. Luckily I found a supplier of media a couple of miles from where I live. I got a bag of each of the three grades he stocks to test them. The options were Scangrit grades 1-3, with 1 being finer and 3 being coarser. For rust I assumed grade 3 would be the job, but it just clogged the blast nozzle up instantly. That was with the biggest nozzle (Ø3 mm) fitted, so grade 3 isn’t compatible with this machine. 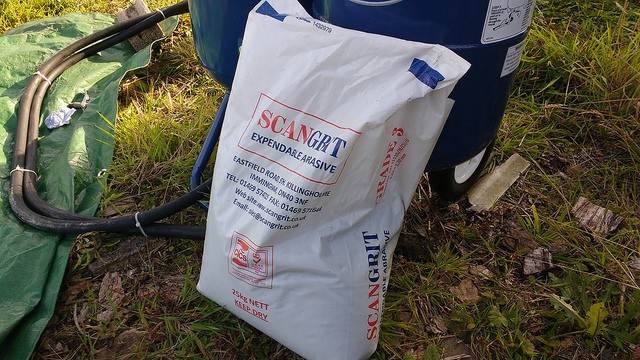 Grade 2 turned out to work fine with this blaster, and did a reasonable job of rust removal. Technically it’s supposed to be single-use, but the guy who sold me the grit reckoned it was good for re-use 2-3 times, provided it was sieved to remove debris. This seemed to be the case, the reused stuff worked fine. 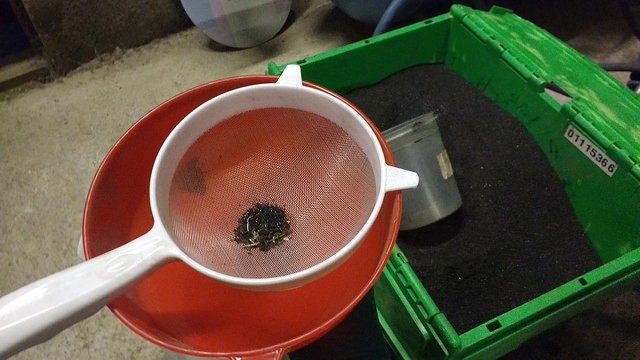 Just as well, as the blaster fairly rips through the grit almost as fast as it goes through air. Bought in bulk (10 bags+) I paid £8 per 25 kg bag. Blasting a wheel used pretty much a whole bag, so that would be expensive if you couldn’t re-use!

I did the blasting on an old tarp, so I recovered maybe two thirds of the grit I was using for reuse. I tried doing some blasting on a windy day at one point and hardly recovered any so, err, don’t do that…

After blasting a massive hole in the tarp I started sticking a pallet under whatever I was blasting. This seemed to help with collecting the grit, it broke the airflow up a bit before it hit the tarp. It was still pretty messy though, the stuff gets EVERYWHERE.

Anyway, back to the wheels. Once the rust was off… 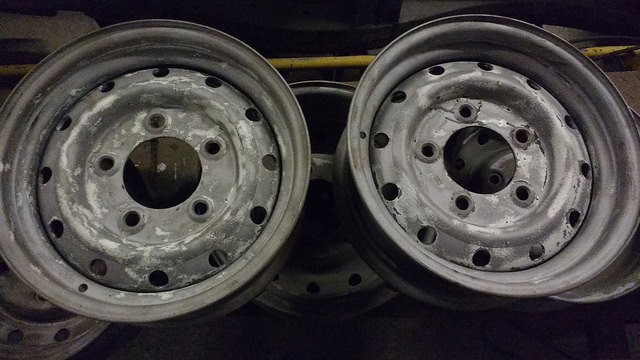 I gave the rims several coats of high-zinc primer… 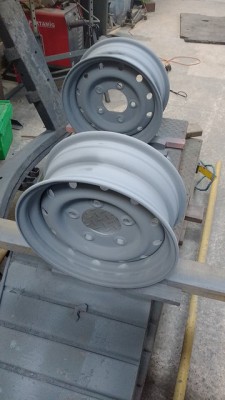 followed by a few coats of matt black paint. 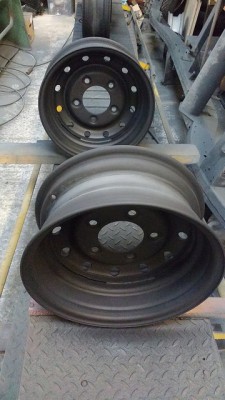 Finally followed by a few coats of limestone (‘cos limestone is awesome) on the outside-facing areas: 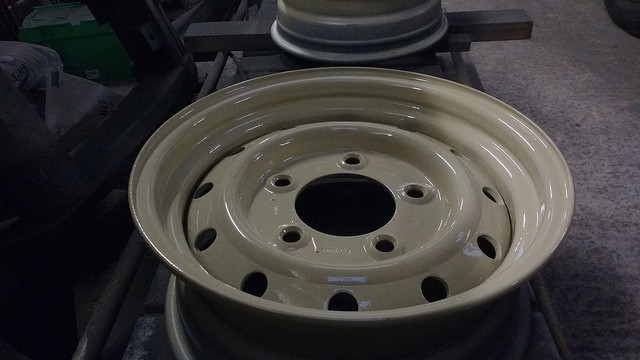 Between coats I had to touch up the area where the two parts of the rim meet by hand – the angle was too acute to get paint in with the spraygun. 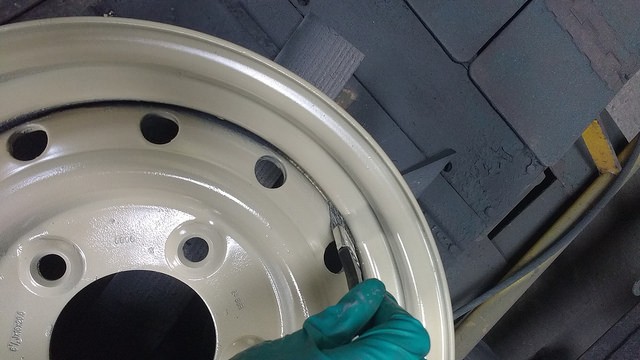 With the spraying sorted, it was time to stick some tyres on. My tyre of choice is the 7.50R16 Michelin XZL, like this… 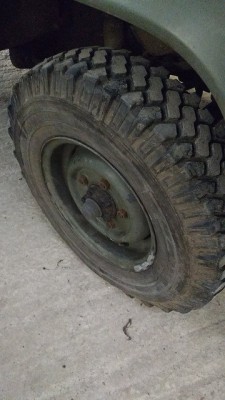 …but I had a set of 235/85 R16 BFG Mud Terrains going spare. They’re roughly the same diameter and tread pattern as a 7.50 XZL, but wider. The carcass doesn’t seem as tough, but they are load rated higher than the XZL’s for some bizarre reason.

Tyre fitting and balancing is a massive rip off, so with a few different vehicles on the go it’s worth DIY-ing it.

Changing the tyres can be done manually with tyre levers, though it’s a horrible job. I picked up a second hand tyre changer on gumtree a while ago which does the trick for Land Rover wheels. 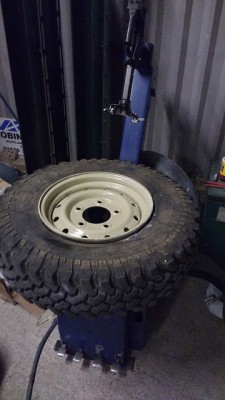 I don’t have the luxury of a wheel balancing machine, but there is a DIY alternative: a Ø4.5″ metal sphere – available on eBay for a couple of quid. 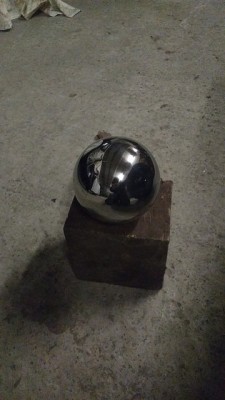 The bore of Land Rover rims is Ø114.3 mm, so the wheel can’t quite pass over the sphere when laid hub-side down. 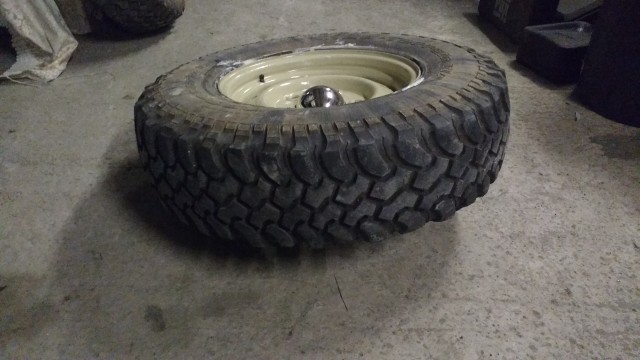 The centre of gravity of the wheel ends up below the centre of the sphere, so with the correct weights applied the wheel will sit level. It’s similar to the principal used on old-school tyre balancers. It can only balance in one plane, so probably wouldn’t work well for more modern wide wheels, but it seems to do the trick nicely for skinny Land Rover wheels.

And lo the 9″ modulars were banished from the land, and there was much rejoicing: 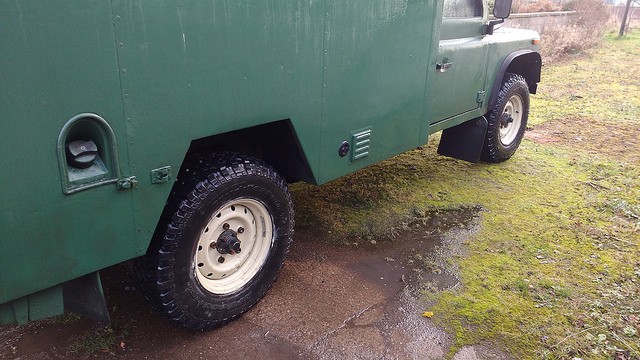