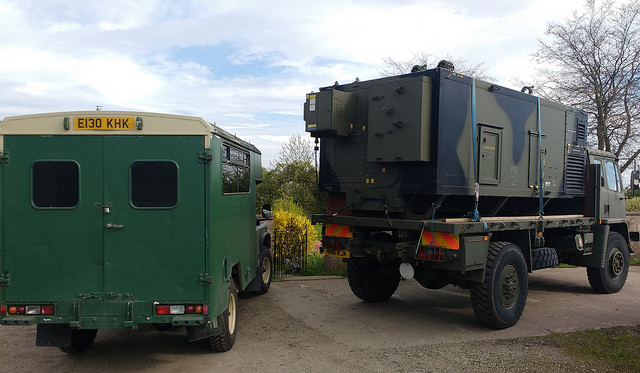 Further to previous musings on getting hold of a larger base vehicle for camper vanning, behold: 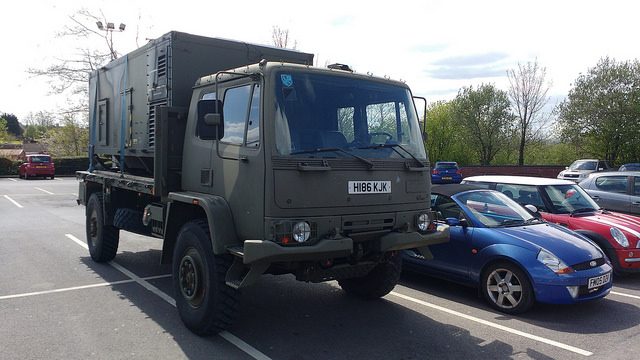 It’s a 1991 Leyland Daf t244, with a radio body from a Mowag Duro grafted (poorly, it must be said) onto the flatbed.

It’s got <30000 km on the clock, having been road registered late 2016 after being released from the MOD. 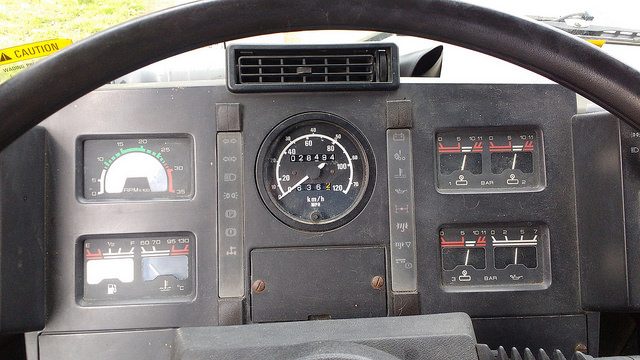 Max gross vehicle weight is 10800 kg. All in all, it’s kind of ridiculous, so it’s been christened the DAFt.

I collected it from middle englandshire somewhere before spending many, many hours driving it ~600 km home. Cruising speed was a gentlemanly 45 mph, at which it returned 17.5 mpg. I’ve got plans to fit a 6-speed gearbox, which should up the cruise speed a bit.

It’s a lot more civilized to drive than I expected. The gearbox is a bit of a porridge-stirrer, but the controls are all very light, and the steering is precise. Ride quality is somewhere between a series and a coil-sprung Land Rover.

The engine is a 5.9 litre Cummins 6bt, which seems to be fairly well-supported. Hopefully I’ll be able to get spares when I need them.

It’s full-time 4 wheel drive, with a lockable centre diff. There’s a remote high-low transfer box, but 1st in the main box is so low that I can’t see me needing the low box much. 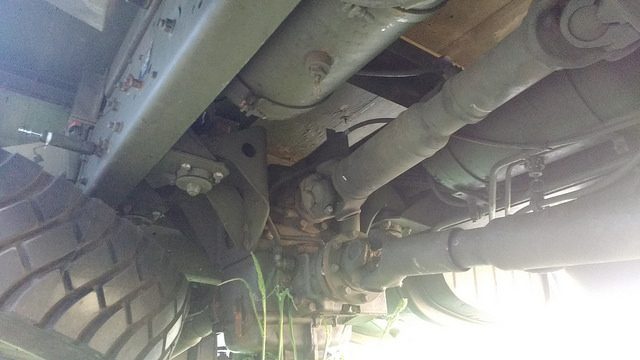 Following the drive home there were a few mechanical niggles to sort out – an oil leak and a fuel leak. Both were easy enough to sort, the oil leak was from a leaky timing case inspection plate… 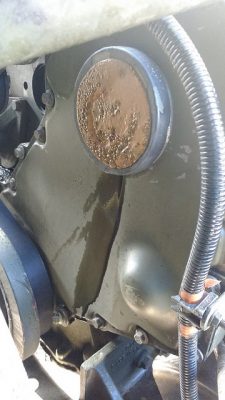 …and the fuel leak was from a banjo joint on the high pressure side of the injection pump. 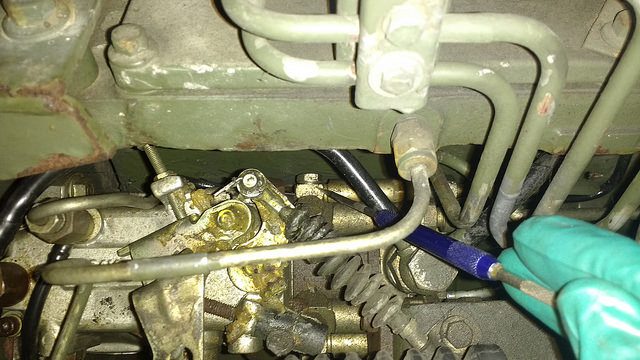 There was also a nasty clutch-spring-type rattle which turned out to actually be a broken exhaust bracket – easy fix! 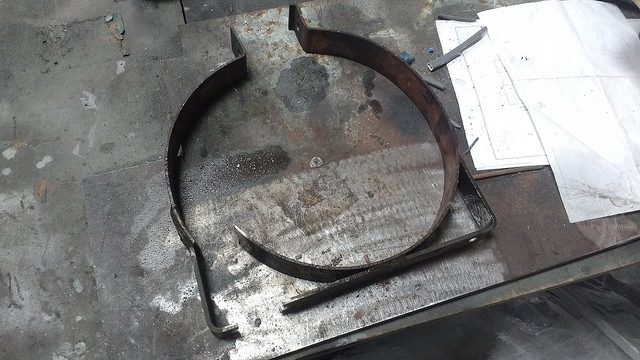 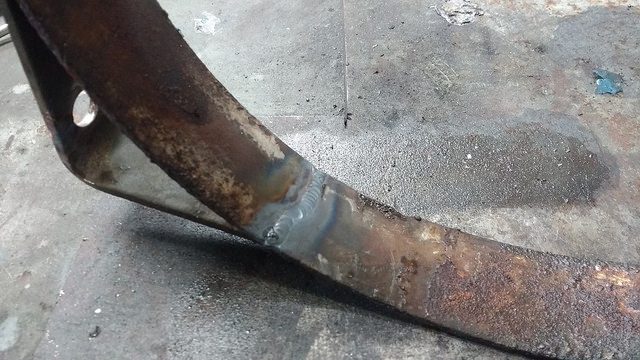 The tilting cab is quite the novelty, though access to the engine isn’t as good as I first thought – you need to squeeze in behind the front wheels before you can reach anything, which gets old pretty quickly when you’re nipping in and out to fetch tools. 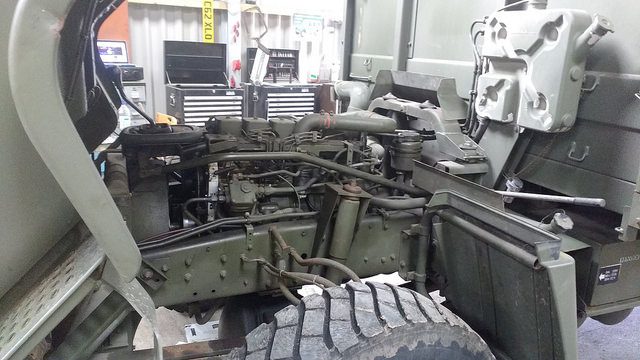 On to the accommodation. The box that’s fitted is quite small for the size of the vehicle – it’s not making very good use of the available space on the flatbed. Internal dimensions are 4.2 m long x 1.56 m high x 1.87 m wide. That’s just slightly too narrow for a bed to run sideways, which fairly sucks. There’s  roughly 70% more floor area than in the 127. That’s not very much more space for something nearly three times the weight. Err, yea, not going to try and defend that…

Internal height is almost identical to the 127. Obviously it’s nowhere near tall enough to properly stand up in, the tradeoff being that it fits through the shed door! 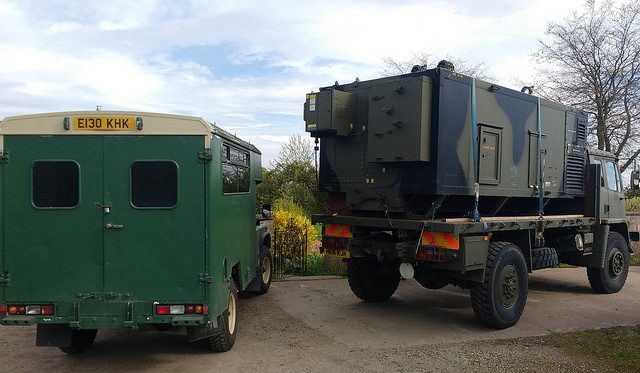 Build quality of the box is excellent. It’s double skinned aluminium, with a thick layer of foam sandwiched in between. As mentioned, the quality of workmanship employed to attach the box to the bed is… not so excellent. 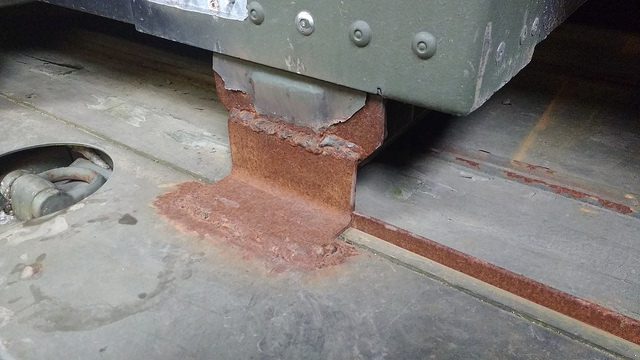 I trust those welds like I trust a politician, so I’ve backed them up with some ratchet straps for now.

The master craftsman involved had even tried to weld some steel angle to the (aluminium) box. I’ve seen many examples of shoddy workmanship, but this is definitely one of my favourites: 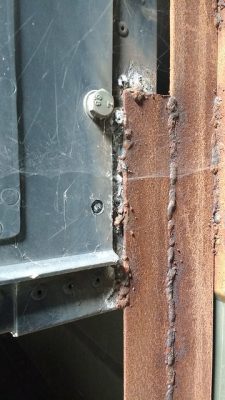 The plan for now is to set up the box as a very basic camper, then give it a few test trips to see if it’s going to be big enough. If not, it’s modular enough that I can just remove the box and sell it separately.

There was a properly enormous air conditioning unit fitted, presumably the radio kit originally mounted generated a lot of heat. While aircon would be a nice feature, the space would be more useful most of the time.It would also need a generator running full time, which I wouldn’t be willing to do – it seems kind of wasteful (yes, I’m fully aware of the irony there).

I removed the unit and the internal walls that separated it from the main compartment. 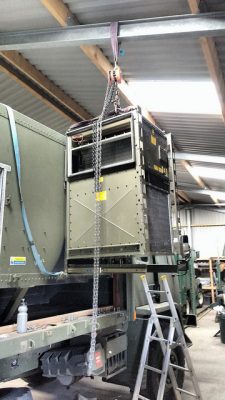 A single 100 watt solar panel came mounted to the roof, mostly held on by (rusty) hopes and dreams. 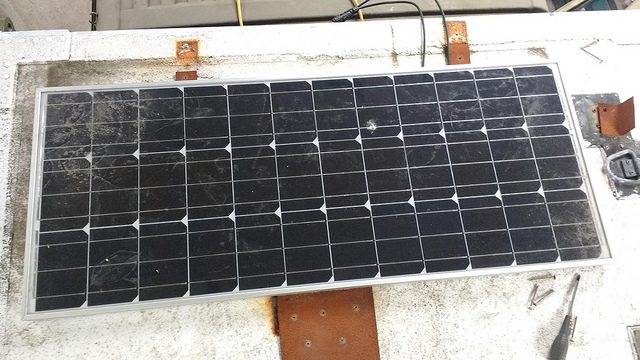 I wanted to run a 24v system in the box for commonality with the base vehicle, so I added another panel in series. Some aluminium brackets replaced the rusty bits of sheet steel holding the single panel on. 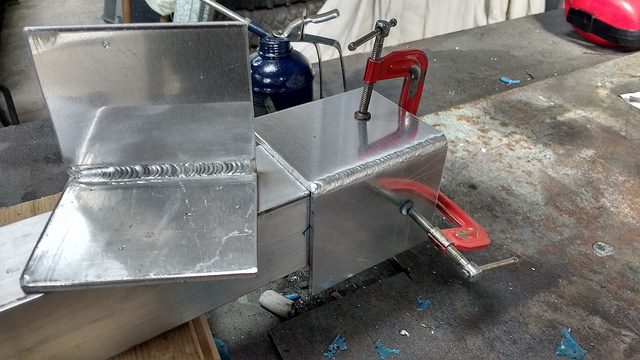 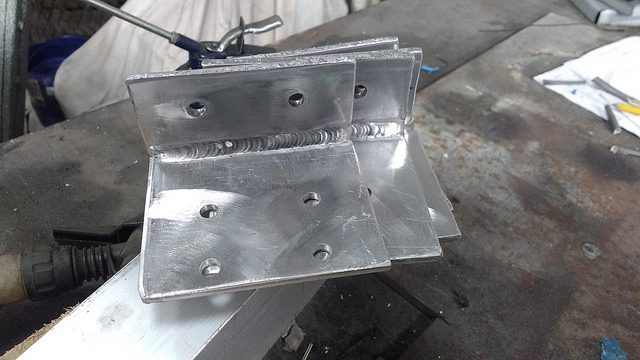 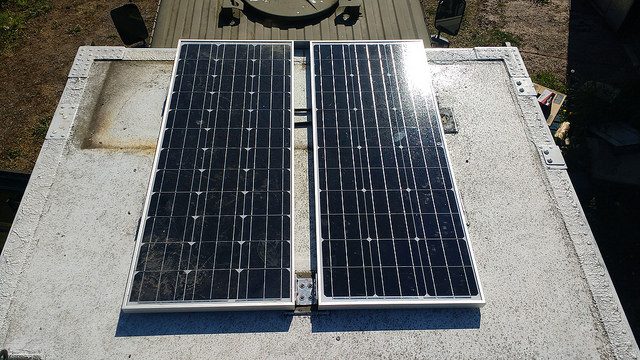 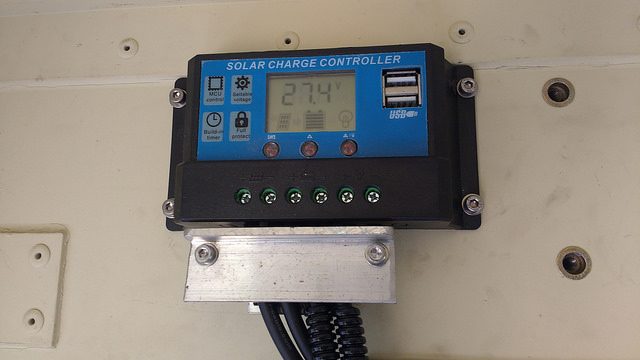 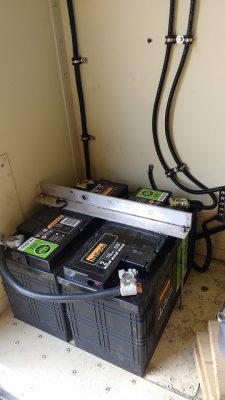 It’s just as well there’s plenty spare payload, as these are seriously heavy!

I considered smaller, lighter lithium ion batteries for about as long as it took to google how much they cost. Yikes!

The box was a bit grim without any natural light, so a tinted perspex window replaced one of the hatches on the side. This has helped, but it’ll need more windows yet. 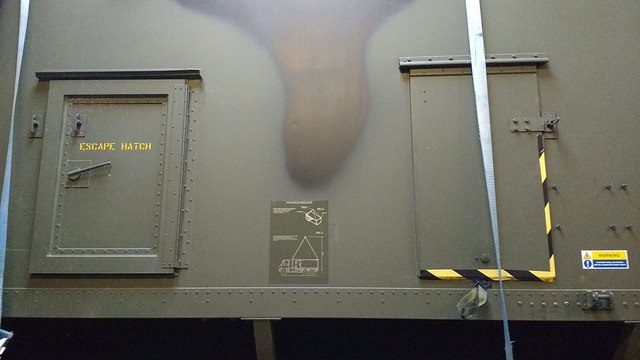 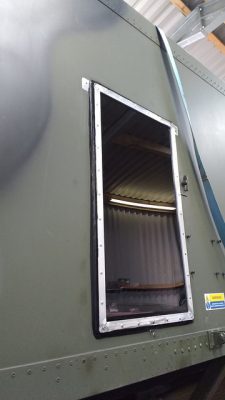 As it stands now then, the interior is an empty space. 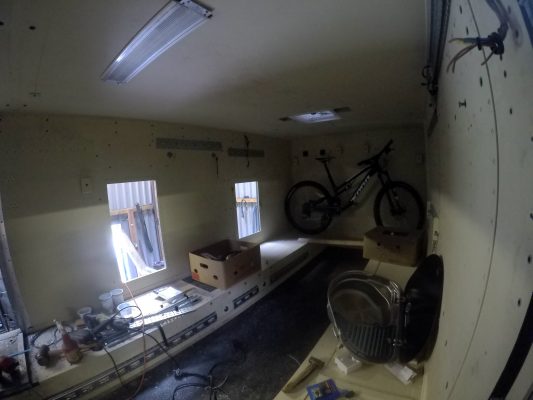 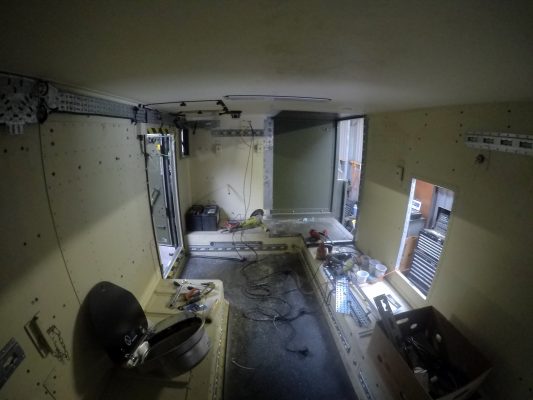